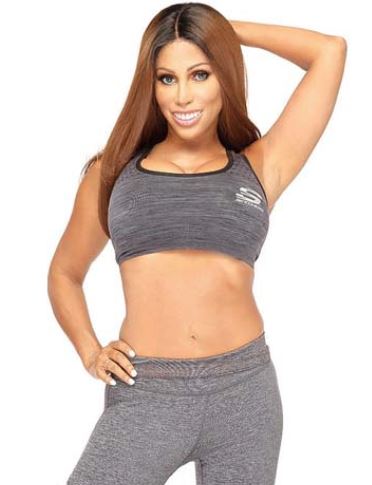 ST. EUSTATIUS–Producer of television fitness programme “Shaping up with Santana,” Santana Rodriquez, will be conducting a workout session in St. Eustatius in commemoration of International Women’s Day, which will be observed on March 8.

Rodriguez was invited to the island by the Statia Women’s Day Organizing Committee. On Thursday, Rodriguez will conduct a one-hour session at the Earl Merkman Sports Auditorium from 10:00am to 11:00am. The session will be free of charge and Product Development Manager at the St. Eustatius Tourism Development Foundation Maya Leon Pandt encourages the community to sign up at the Gym by Leoncio.

“Let us seize the moment to celebrate the achievement of equality and empowerment of women across the nations on this international women’s day,” member of the Women’s Day Committee Ingrid Whitfield said.

“Fitness is key to the body. As we grow older our bodies demand more muscular support. I am contented and at the same time happy that the stakeholders involved have come up with the idea to implement a fitness segment to the Women’s Day programme in honour of all female gender,” Statia fitness trainer Leoncio Lopes said. “I am at the same time thrilled to welcome fitness professional Santana Rodriquez to Statia and I’m looking forward to working with her at the Earl Merkman auditorium.”

Rodriguez’ television programme is being run in Los Angeles, New York and various parts of the Caribbean. She has impacted thousands of lives as a fitness champion, international print magazine model and fashion entrepreneur and television host/personality.

Rodriguez won six major competitions and earned a title called “Miss Team USA Modelquest” with the Amateur Bodybuilding Association Federation. “These were not bodybuilding competitions, but physique competitions with an emphasis on tone, symmetry and definition. It was such an honour to have carried on such a title,” she said.

Rodriguez’ popularity as a fitness champion led her to appear in more than 20 international magazines, including numerous layouts and editorials in various publications. Beyond her desire to give back and become a powerful role model and motivator for women, Rodriguez attributes her ongoing success to her father, whom she calls “the strongest man I know.”

“He taught me how to be the independent, confident woman I am today. When young women watch me and learn my story, I want them to know that if they don’t like something they see or face obstacles in their lives, they have the power to create something on their own. They can be anything they want to be and they have a voice that people will listen to,” she said.